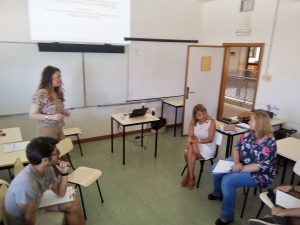 We are very pleased to report that the First Summer School in Intercultural  Communication, organised in collaboration with the University of Madeira (Portugal), was a real success. The School took place from 4-9 September 2017 in the Faculty of Arts and Humanities, who kindly hosted the event. It was an intensive, fast-paced course organised and facilitated by Dr Alcina Sousa (University of Madeira/ENIEDA Network), Dr Svetlana Kurteš (Texas A&M University Qatar/ENIEDA Network), Dr Vladimir Žegarac (University of Madeira), and Ms Joy Caley (English Language Centre York). The School’s participants, involving both university students, teachers and professionals, had a chance to familiarise themselves with a selection of topics in intercultural and interactional pragmatics, professional communication and rapport management. Focus group discussions and workshops provided the participants with the opportunity to gain a deeper understanding of the topics, as well as some practical hands-on experience.

Dr Ana Isabel Moniz, Dean of the Faculty of Arts and Humanities, greeted the participants, wishing them every success, and thanked the Summer School facilitators for their commitment and dedication. We would also like to thank Professor Moniz and other members of the senior management of the Faculty of Arts and Humanities and the University of Madeira for their continued support of the ENIEDA Network activities. 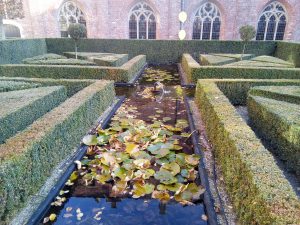 The ENIEDA Network was present at the 7th International Conference on Applied Linguistics and Professional Practice (ALAPP2017), organised and hosted by the University of Ghent (Belgium) from 21-23 November 2017. The conference theme was ‘Communication, interaction and quality of service’ and ENIEDA’s contribution was a round table discussion entitled ‘Linguistic and intercultural education for global professionals: towards (a) sustainable post-method model(s)’. Convened by Dr Svetlana Kurteš (UK), the Round Table invited participants were Professor Tatiana V. Larina (Russia), Professor Michael B. Hinner (Germany), Dr Uwe Baumann (UK) and Dr Jagoda Granić (Croatia).

Participants addressed a range of issues in the area of linguistic and intercultural education, its current status and challenges it faces on a day-to-day basis. They also identified possible avenues for its future development and reflected briefly on their own pedagogical practice.

We are delighted to announce the 8th Lodz Symposium New Developments in Linguistics Pragmatics (NDLP2017), which is organised in association with the European Network for Intercultural Education Activities (ENIEDA). The symposium, taking place from 15-17 May 2017, is hosted by the Department of Pragmatics, University of Lodz, Poland. The symposium will also feature an ENIEDA thematic panel, entitled Deconstructing and reinterpreting (in)tolerance: a transdisciplinary dialogue. The panel, scheduled on 15 May, is convened by Dr Svetlana Kurteš (Qatar/UK). Capitalising on the success of the panel discussion organised at the previous NDLP Symposium in 2015, the panel intends to continue and broaden the dialogue, this time putting under the spotlight a range of issues clustering around the concept of (in)tolerance, broadly defined and observed from a transdisciplinary perspective.

Further updates about the conference and the panel can be found on our Twitter account, using the hashtags #NDLP2017 and #ENIEDApanel.

We very much look forward to seeing you all in Lodz. Come join us!

ENIEDA at hoc Series at the University of Madeira

Following a successful launch in 2016, we are happy to announce the 3rd ENIEDA ad hoc Series event, hosted by the University of Madeira, Portugal. This two-day event, entitled ‘Intercultural communication for global professionals: current trends and future perspectives’, took place on the 15th and 17th March 2017 at the Faculty of Arts and Humanities, University of Madeira. Convened by Dr Alcina Sousa (Portugal) and Dr Vladimir Žegarac (UK/Portugal), the event also saw the participation of Dr Svetlana Kurteš (UK/Qatar), and Dr Sylke Meyerhuber (Germany), engaging in presentations, discussion panels and workshops. 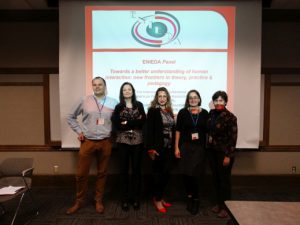 The 3rd International Conference of the American Pragmatics Association (AMPRA) took place from 4-6 November 2016 and it was hosted by the University of Indiana in Bloomington. Following our successful collaboration during the 2nd AMPRA conference (hosted by the UCLA in October 2014), the event featured another ENIEDA panel, a continuation of the dialogue we initiated in Los Angeles. The panel, entitled ‘Towards a better understanding of human interaction: new frontiers in theory, practice and pedagogy’, was convened by Dr Svetlana Kurteš (University of Madeira, Portugal) and among the invited participants were: Professor Piotr Cap and Dr Monika Kopytowska (University of Łódź, Poland), Professor Zohreh R. Eslami (Texas A&M University at Qatar, Qatar), Ms Zainab Siddique (Namal College, Pakistan) and Dr Maja Halilović-Pastuović (Trinity College Dublin, Ireland). The conference is a high profile global event, attracting a significant number of international scholars working in the area of linguistic pragmatics and its many subfields. Organised by Professor Istvan Kecskes, President of AMPRA, and Professor Cesar Felix-Brasdefer, Executive Secretary, the conference also featured a number of pre-sessional workshops. Among the keynote speakers this year were: Professor Kai von Fintel (MIT), Professor Susan Herring (Indiana University) and Professor Stephen Neale (CUNY). 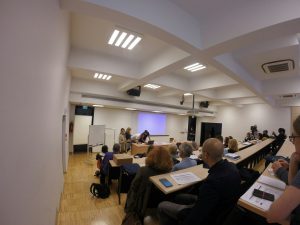 We are very pleased to announce that the 7th International Conference in Intercultural Pragmatics and Communication (INPRA2016) hosted another ENIEDA Panel. The conference, convened by the University of Split, Croatia, took place from 10-12 June 2016. The conference programme  can be downloaded from the conference website. Further updates about the event can also be found on Twtter, following the hashtag #INPRA2016. Our INPRA2016 panel, entitled Contextualising interculturality: challenges and perspectives,  opened a cross-disciplinary dialogue, exploring a range of topics dealing with aspects of interculturality and its multifaceted manifestations in daily interaction, mediated or otherwise. More specifically, our intention was to contextualise the notion by looking into current challenges that interculturality faces both at societal and individual levels. We intended to deconstruct its ideological embeddedness, identify its discursive manifestations, multimodal frameworks and semiotic resources. The panel convenor was Dr Svetlana Kurteš (University of Madeira, Portugal) and the invited panellists were Dr Jagoda Granić (University of Split, Croatia), Dr Vladimir Žegarac (Universityof Bedfordshire, UK), Joy Caley (English Language Centre, York, UK), Professor Tatiana Larina (Peoples’ Friendship University of Russia), Dr Igor Lakić (University of Montenegro), Dr Noémie Hermeking (Munich School of Philosophy, Germany), Dr Monika Kopytowska (University of Łódź, Poland) and Dr Fabienne Baider (University of Cyprus). Further updates about the panel can be found on our Twitter account, using the hashtag #ENIEDApanel. 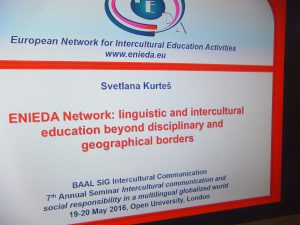 We are pleased to announce that the event organised by the British Association for Applied Linguistics (BAAL)  featured a presentation showcasing the ENIEDA Network, its goals and activities. The BAAL Special Interest Group on Intercultural Communication has organised the 7th Annual Seminar in London 19-20 May 2016. The Seminar, entitled ‘Intercultural communication and socal responsibility in a multilingual globalized world’, was hosted by the Open University and convened by Dr Uwe Baumann, Associate Dean for Teaching and Learning, Faculty of Education and Language Studies, Open University. The Seminar featured the keynote lecture by Professor Adelheid Hu (University of Luxemburg) and presentations by Dr Maria Fernandez-Toro (Open University), Professor Michael Handford (University of Tokyo), Haynes Collins (University of Leeds), Donna Humphrey (Nottingham Trent University), Dr Tony Young (Newcastle University) and others. ENIEDA was represented by Dr Svetlana Kurteš (University of Madeira), whose talk was entitled ‘The ENIEDA Network: linguistic and intercultural education beyond disciplinary and geographical borders’.

ENIEDA Ad Hoc Series launch at the University of Madeira 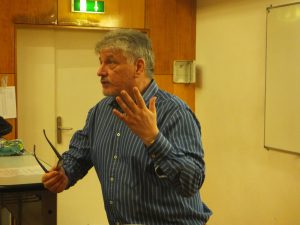 We are pleased to announce the launch of our new ENIEDA Ad Hoc Series, kindly hosted by the University of Madeira, Portugal. The series are envisaged to be an open-format, multimodal, cross-disciplinary and interactive forum for discussion, reflection and creation, transgressing and surpassing all remaining boundaries. Remaining firmly anchored in and passionate about issues in linguistic and intercultural education, their pedagogical applications and practical implications, we are now ready to explore the new frontiers, re-define and re-contextualise the notion of interculturality, aligning it with the challenges and perspectives of the reality/ies we live in. The first in the series was a two-day event, entitled ‘Understanding multimodality across and beyond disciplinary and cultural boundaries’, taking place on 9 and 11 March 2016 at the University of Madeira, Faculty of Arts and Humanities. The event, organised and convened by Dr Svetlana Kurteš (Portugal/UK) and Dr Alcina Sousa (Portugal), featured presentations by Dr Monika Kopytowska (Poland), Dr Samuel Mateus (Portugal), and a workshop on intercultural communication by Dr Vladimir Žegarac (UK). The event attracted the attention of the local media, focusing specifically on the role of intercultural training for professionals in tourism and hospitality industry. The Ad Hoc event participants also met with Professor Paulo Rodrigues, Dean of the Faculty of Arts and Humanities, University of Madeira, exploring avenues and modalities of future collaboration.

The latest volume of the International Review of Pragmatics (7.2) is out. It is a special issue, featuring contributions from some of the most prominent ENIEDA Network members and supporters. The special issue, entitled ‘Communicative styles and genres: between universality and culture specificity’, is guest-edited by Svetlana Kurteš and Monika Kopytowska. Among the contributors are: Istvan Kecskes (Intracultural Communication and Intercultural Communication: Are They Different?), Tatiana Larina (Culture-Specific Communicative Styles as a Framework for Interpreting Linguistic and Cultural Idiosyncrasies), Vladimir Žegarac, Joy Caley and Joanna Bhatti (Communication and Core Conditions in Rapport Building: A Case Study), Zohreh R. Eslami, Nasser Jabbari and Li-Jen Kuo (Compliment Response Behaviour on Facebook: A Study with Iranian Facebook Users), Dániel Z. Kádár (Identity Formation in Ritual Interaction), Monika Kopytowska (Covering Conflict: Between Universality and Cultural Specificity in News Discourse, Genre, and Journalistic Style) and Anna Ivanova, who contributed with a review article entitled Political Communication in Context: A Genre-Based Approach. 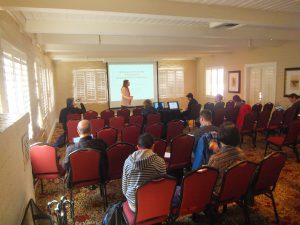 The Fifth International Conference on the Development and Assessment of Intercultural Competence Intercultural Competence: Traditions and Transitions (ICC2016)  featured an ENIEDA symposium. The conference waas hosted and organised by the Centre for Education Resources in Culture, Language and Literacy, University of Arizona (Tucson, AZ, USA) from 21 to 24 January 2016. The ENIEDA symposium, entitled ‘Exploring Interculturality beyond (Disciplinary) Boundaries: theory, practice, pedagogy revisited’, was organised and convened by Dr Svetlana Kurteš (UK). It explored a range of topics clustering around the notion of interculturality, broadly defined, focusing in particular on (some of) its theoretical underpinnings, practical manifestations across a variety of public spaces and their discoursal and semiotic frameworks and pedagogical approaches. We have scrutinised the kaleidoscopic nature of interculturality, disambiguating it both in scholarly and phenomenological terms and finding new arenas for their contextualisation. The symposium participants were Professor Zohreh Eslami (USA), Dr Vladimir Žegarac (UK), Dr Monika Kopytowska (Poland) and Dr Svetlana Kurteš.